The Southern California-based jazz singer-pianist Aimee Nolte, who made a strong impression with her first three CDs (Up Til Now, Just Us, and Looking For The Answers), will be releasing her latest recording Lighten Up on April 24, 2020. Her very appealing and accessible voice, creative piano playing, and close interplay with her sidemen, coupled with her continually surprising arrangements make the music on Lighten Up particularly memorable.

“Most songs in this set have a romantic message that will resonate with many people,” explains Aimee. “I used arrangements that I had been performing for years with my group and were so special to me that I knew they had to be recorded.” For this colorful project, the pianist-singer is joined by guitarist Mike Scott, bassist Bruce Lett, and drummer James Yoshizawa, each of whom she has played with for many years. “Mike Scott and I understand each other’s playing very well after all of this time and on ‘All The Things You Are’ and ‘Skylark,’ we improvise at the same time. I love the energy and the youth that James Yoshizawa brings to the music. In addition to his drumming, he is also a world class Irish bones player who competed in Ireland last year; he plays the bones on my original, ‘Ella’s Song.’ Bruce Lett is a bass player who knows every song and can play any o them in any key. He hardly ever needs any instructions and has a real sensitivity in addition to being able to swing very hard.” 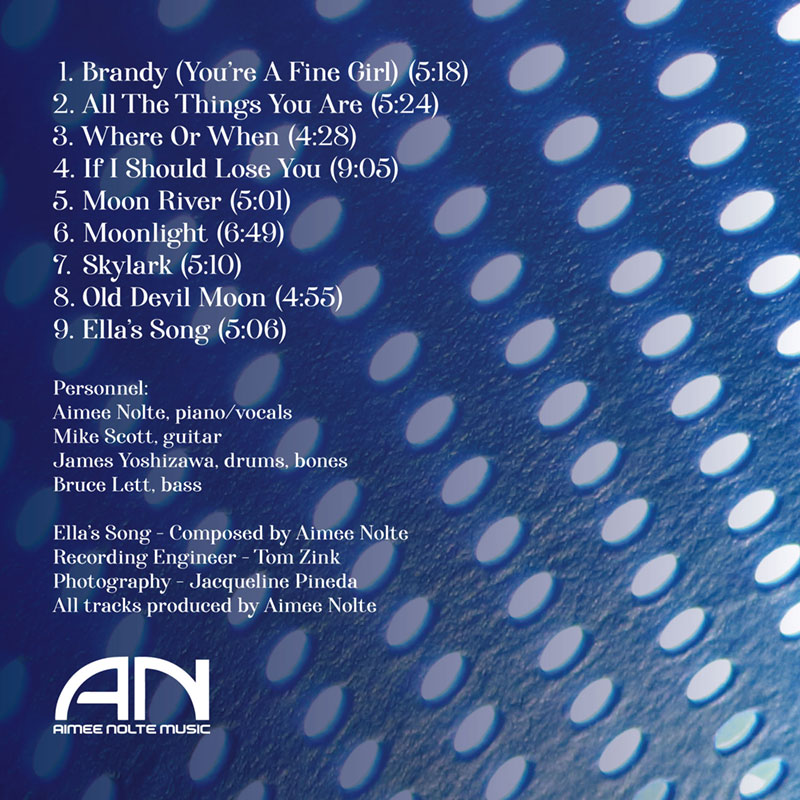 Lighten Up consists of inventive versions of six jazz standards as well as some surprises: “Ella’s Song,” John Williams’ “Moonlight” (written for the 1990s movie Sabrina), and “Brandy,” a pop hit for the Looking Glass that she turns into an atmospheric jazz piece. “My earlier albums are more introspective and darker so on Lighten Up I decided to display my fun and lighter side. ’Brandy’ has a story that always stuck with me ever since I heard it as a teenager on my Mom’s compilation of hits of the 1970s. One of my favorite songs, ‘If I Should Lose You’ I learned from hearing Nina Simone years ago. She sang it as a tear-your-heart-out type of ballad. But after hearing the Keith Jarrett Trio really swinging hard on that song, I decided in my version to include both approaches.”

Other highlights include the hypnotic effect that Aimee creates with her pattern on the piano and floating vocal on “All The Things You Are,” a melancholy “Where Or When” that has her voice accompanied solely by Scott’s guitar, her lovely version of “Moon River,” a bossa-nova treatment of “Moonlight,” her wordless interplay with piano and guitar on “Skylark,” a bluesy “Old Devil Moon,” and her original “Ella’s Song” (written in tribute to her daughter when she went to college) which has also been released as a single. 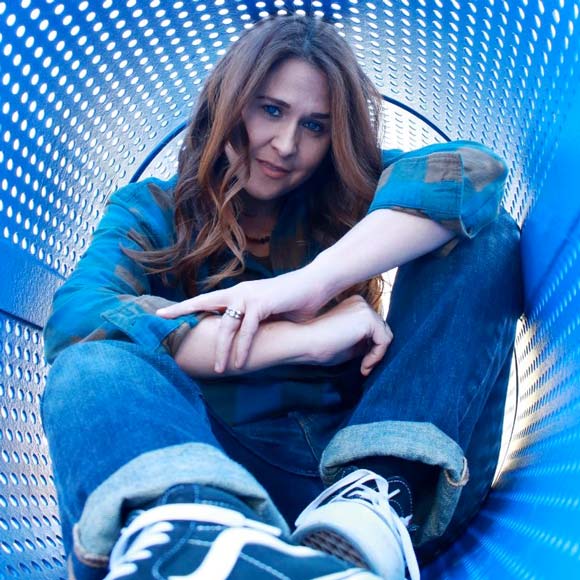 Aimee Nolte grew up in Weaverville, a small town in Northern California. She studied classical piano until she was 15. She fell in love with jazz when she began going to festivals with her high school jazz band. “As soon as I figured out that there was a type of music that one could make up on the spot, I knew that that was it for me.

Creating my own improvisations in real time seemed more important to me than any other type of musical endeavor.”

She studied jazz piano at Brigham Young University and developed the talent of being to sing while playing piano. “I decided that if Elton John, Shirley Horn, Billy Joel, and Diana Krall could do it, then why can’t I?”

While raising a family, Aimee worked regularly with her group in Southern California, recorded a series of rewarding CDs, became an influential teacher of jazz piano and singing, and started a popular You Tube channel (she has over 170,000 subscribers) which exposed her musical talents to a much bigger audience than she could achieve playing in clubs.

With the release of Lighten Up, she looks forward to touring, writing more music, and continuing to perform with inspiring musicians. “My goal is to continue playing exactly what is true to me in the moment, translating whatever is in my heart to my fingers, my voice, and to the audience.”